Big funding decision looming: The catalyst FYI is looking for?

Disclosure: S3 Consortium Pty Ltd (the Company) and Associated Entities own 1,097,000 FYI shares at the time of publishing this article. The Company has been engaged by FYI to share our commentary on the progress of our Investment in FYI over time.

In 2023 we are focusing on development stage resource companies that are close to becoming “producers” during this commodities super cycle.

These are later stage companies on the path to building an actual mine and/or processing facility which will allow them to start generating revenue.

However, funding and construction risks remain significant hurdles for these development stage companies.

This is because as these companies aim to secure large project financing deals, they are stuck in “funding limbo” - with a project big enough to underpin the share price, but yet to secure funds for the upfront development costs.

Companies that can and do secure funding for projects can re-rate significantly as they move from the development stage to the production stage, generating actual revenues and scaling up processing technologies.

HPA is used in LED lights and sapphire glass screens on your smart phones, and increasingly, as the separator in lithium batteries - a market that we’re betting continues to grow going forward.

What separates FYI from other hopeful producers is that it has the $13.3BN-capped Alcoa as a project financing partner - this is a Fortune 500 global aluminium company with deep pockets and lots of customers.

The next hurdle for the funding is a final investment decision by Alcoa to provide US$50M for the demonstration plant, which is due soon.

FYI’s HPA project could transform the industry, with a process to produce cleaner and cheaper high purity alumina (HPA).

FYI is now approaching the “funding decision” stage for a demonstration plant.

This is the decision by $13BN capped Alcoa to provide US$50M in capital for the construction of a demonstration facility that hopefully produces HPA in large quantities and at a high purity ahead of a decision to proceed with the big, full-scale 8ktpa plant.

FYI’s project has an NPV of over US$1BN, with FYI taking 35% and project partner taking 65% - however to start generating cash, a capital cost of US$250M is required.

To earn its stake, Alcoa is contributing US$243M to the project over 3 stages.

HPA has been introduced into the critical minerals lists for Australia, the European Union and the USA, recognising its importance for electrification.

FYI has been working on its processing technology long before the market caught onto the importance of HPA, and now has a DFS level project with a ~US$1BN net present value (NPV).

In 2021, FYI partnered with the Australian subsidiary of the leading global aluminium producer, Alcoa, to develop its HPA project via a joint venture (JV) arrangement.

In exchange for its 65% majority share of the project, Alcoa would fund 97% of the project’s total US$250M cost over 3 stages as follows:

The first stage has already been completed with purity levels up to 5N (ie five 9’s - 99.999%, which would be a premium product), and now the decision for the second stage US$50M payment is looming.

As FYI completes each stage, the project becomes further de-risked, and the company can hopefully grow into its full valuation based on DFS numbers - which at 35% of the A$1.41BN (US$1BN) project Net Present Value (according to FYI’s 2021 DFS), is around A$500M.

Or in simple terms, FYI could earn ~$70M EBIT for the next 25 years for a capital contribution of ~US$7M, just from the first plant facility. Of course, this would be more, should further plants be constructed.

Of course we are using the DFS as simply a guide to value here - lots of different things can happen to project economics once in production, including positive or negative fluctuations in the market price of HPA - and rises or falls in costs - however before we get into production, this is a good a guide as any as to how much FYI’s 35% equity stake is worth.

FYI and Alcoa aim to produce HPA that is purer and substantially cheaper than the current HPA in the market, and leaves a much smaller environmental footprint.

The JV is currently progressing a demonstration plant in WA which will produce up to 240 tonnes per annum (tpa) HPA utilising FYI’s new technology.

This morning FYI announced an update on the small scale demo plant.

FYI confirmed that together with Alcoa, a site had been selected for a small-scale production and demonstration facility site.

This site is in ‘Battery Alley’ near Kwinana in WA - home to a burgeoning battery industry - and that environmental assessment works commenced.

Whilst it can be seemingly slow moving when projects reach the “development” stage of the company lifecycle, completing key milestones such as design engineering, site selection and permitting are all on the critical path towards constructing the demonstration plant.

Whilst they may not set the market on fire, these can be crucially important milestones for debt and equity financiers and are generally precursors to securing funding - or in FYI’s case, for Alcoa to write a significant project financing cheque.

Below is an image showing where FYI sits in the company lifecycle stages:

We think 2023 will be the year for companies with projects that are ‘shovel ready’ - meaning resource definition and economic studies are complete and they are ready to start building a mine... if they can get financing.

In early to middle stages of a commodities supercycle, commodity prices are high and the market needs mines built ASAP, so we think significant amounts of capital will start finding its way to later stage projects.

We think that security of supply issues coupled with decades of underinvestment will create a sense of urgency from both the investment community and governments leading to a wave of capital flowing into projects that are closest to being put into production.

FYI fits this bill with a project that has already completed a Definitive Feasibility Study (DFS) and a big cashed up partner on board.

To see why we think projects like FYI’s will thrive this year check out our full 2023 outlook for DFS level companies here: DFS Level Companies Outlook for 2023.

With site selection complete and progress towards commencing stage 2 works, we are now looking forward to an investment decision from Aloca for the US$50M that would fund the development of the demo plant.

We think this is the next major catalyst for FYI and would provide substantial validation of FYI’s technology.

We suspect that Alcoa will do so, given the time and energy they have already put towards advancing the project with FYI, but nothing is assured until the money is in the JV’s bank account.

Whilst today’s update didn’t provide an exact date for Alcoa’s stage 2 decision, it did provide further confidence that the JV relationship was still heading that way.

This brings us to our ‘Big Bet’ for FYI which is as follows:

NOTE: our “Big Bet” is what we HOPE the ultimate success scenario looks like for this particular Investment over the long term (3+ years). There is a lot of work to be done, many risks involved - just some of which we list in our FYI Investment memo. Success will require a significant amount of luck. There is no guarantee that our Big Bet will ever come true.

To monitor FYI’s progress since we first Invested and track how the company is performing relative to our “Big Bet”, we maintain the following FYI “Progress Tracker”:

The FYI story to date 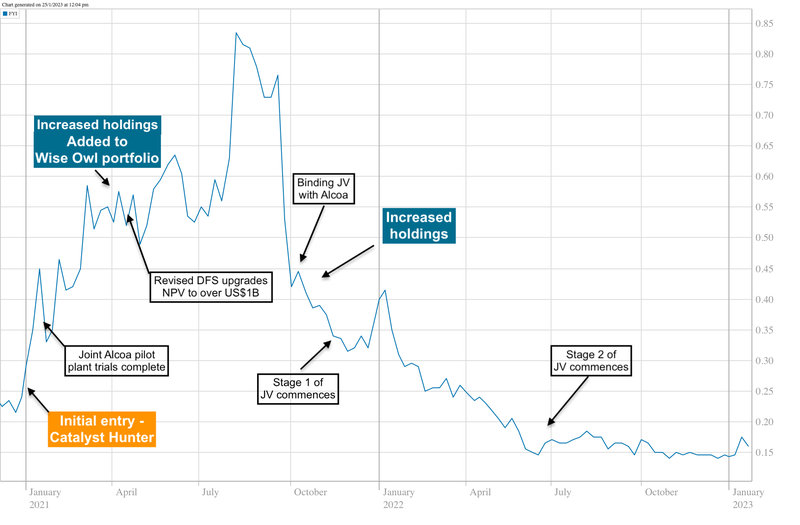 While the company’s share price has come back down close to our Initial Entry Price, FYI has made significant progress fundamentally.

We have seen FYI complete production trials and an effective completion of stage 1 of its JV.

We suspect that broader market conditions and a lack of newsflow from the company while it got this work done was a contributing factor to the share price declines.

The share price also fell significantly after the JV agreement was signed with Alcoa - which we think was a “sell the news” type event.

Where investors were expecting ‘great’ in an extremely optimistic market, what FYI announced was ‘good’ - ending up with 35% of the project - which may have disappointed a few speculative investors as it capped the commercial upside based on 35% of the DFS NPV at ~A$500M.

While FYI was capped at ~$300M at the time, presenting some upside, traders likely moved their money out for quicker potential returns elsewhere.

As company’s enter quiet execution mode progressing a project towards development, the market can often start to get impatient or just lose interest in the company’s story.

Some investors view these periods as buying opportunities as they are willing to hold the stock for the longer term, and wait out the quieter periods that allows the company to grow into its valuation.

Of course this is not without risk, and if company doesn’t deliver on its objectives or the overall market dynamics change, the share price may never recover.

While FYI’s project isn't so much a “mineral discovery”, the following image shows how share prices typically move as company’s move from one stage of a project’s life cycle to the next.

We think FYI firmly sits inside the “feasibility” phase. 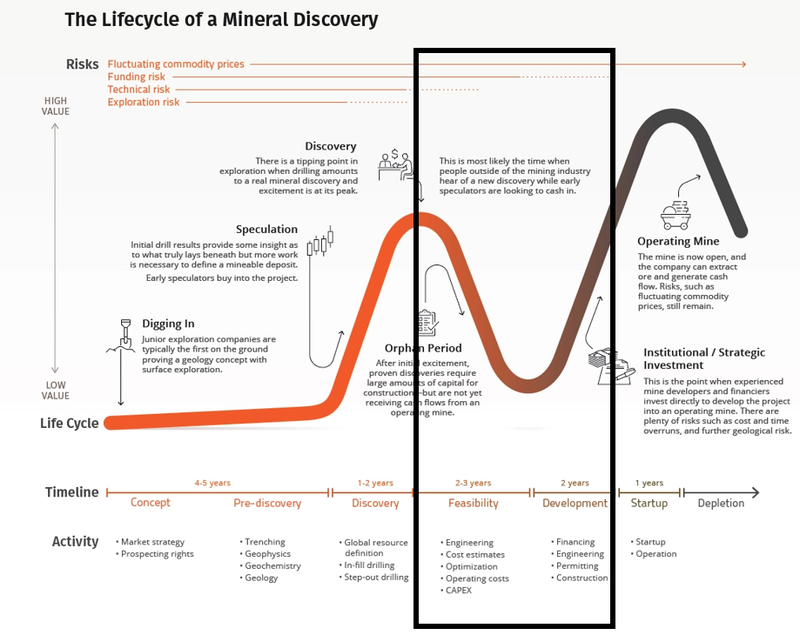 Compared to 12 months ago, FYI is more advanced at a project level and more de-risked, yet the share price is ~80% lower than the September 2021 highs.

With the Alcoa deal moving along strongly and our positive outlook on DFS-level companies, we think that 2023 could be the year for FYI.

There are some key risks however, namely the Alcoa funding agreement, potential cost blowouts and delays that could hamper the share price as well as a drop in demand for HPA.

That said, the US$50M Alcoa funding for stage 2 should significantly de-risk the project and we expect the share price to re-rate upon the news.

Here is what FYI has planned for the next 12 months:

We are most looking forward to the JV agreement with Alcoa being formalised.

Once Alcoa makes a firm commitment to the demonstration plant, we should see the US$50M in funding unlocked.

Considering FYI’s market cap is only ~$62M, we expect to see the market re-rate FYI off the back of any positive news on this front.

At this stage, FYI has not given an exact date on FID timing, stating in today’s announcement that the parties “are working towards FID delivery as soon as practical”, but we are hoping to see an update on this front in the first half of this year.

What could go wrong?

To see these risks in detail click on the image below. 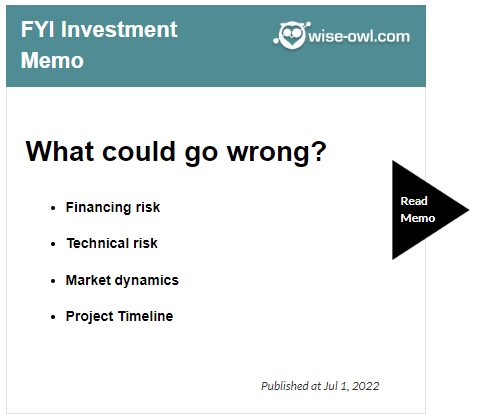 Below is our Investment Memo for FYI where you can find a short, high level summary of our reasons for Investing.

The ultimate purpose of the memo is to record our Investment thesis in order to benchmark the company's performance against our expectations.