This is VW’s answer to Tesla’s Battery Day.

Power Day was held overnight, and it gave investors and EV fans the chance to take a sneak peak at VW’s plans over the coming years to scale electric vehicle production.

We are big investors in the European EV thematic.

Our three key investments that all intend to supply EU battery makers over the coming years are:

You can watch the whole Power Day event here (it goes for 2 hours) – we strongly suggest watching it if you are an avid investor in the European battery metals space.

Here are the key takeaways from the day.

VW’s “Volume cell” (the cell that VW and its partners are seeking to produce the most of) will contain Lithium, Nickel and a high amount of Manganese.

We already knew that Lithium would be used in the cells, but the surprise winner from this particular news is EMN.

We weren’t expecting the biggest car maker in the world to announce that the vast majority of its cells would now be using a high amount of manganese.

We already knew that VW was going to build two factories, but last night they announced FOUR MORE on the European continent.

This is over 200,000 tonnes per year lithium chemicals demand just for Europe and just for VW. Thomas Schmalz, a Technology Director at VW, announced that one of the new battery factories would be built in Europe – “in either Czech Republic, Poland or Slovakia”

This was particularly exciting for EMN and EMH, given their projects are located in the Czech Republic.

We are counting down to the days when the location of the VW Eastern Europe factory is announced.

As expected, VW and its battery partners made a big deal about sustainable and local supply of battery metals.

We selected our investments in EMN, EMH and VUL because they are all located on the European continent.

The big winners on VW’s sustainability announcements were:

He was talking about how VW plans to expand the scope of its value chain from purchasing of raw materials directly from miners to making investments in various parts of the supply chain.

VW doesn’t say it will invest in mining, but does appear to leave the door open to it. 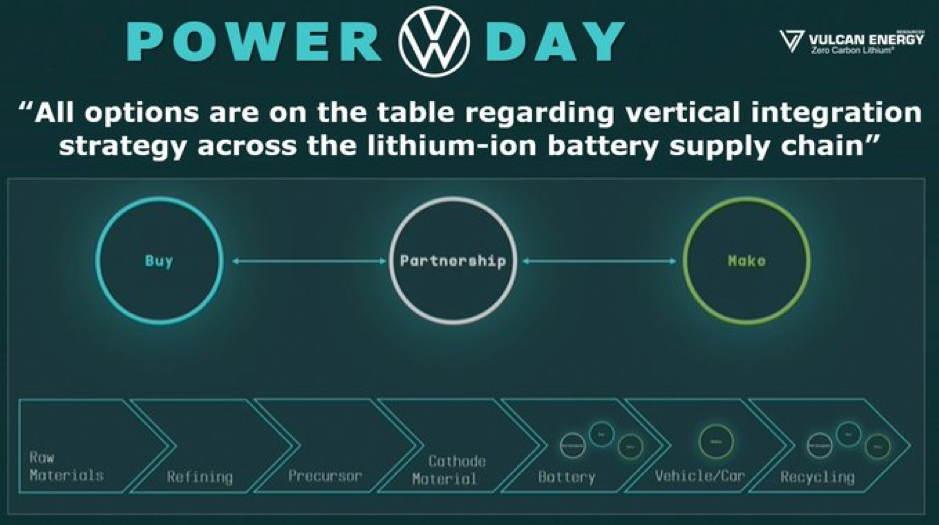 It’s an exciting time for EU battery metals stocks, especially after last night’s announcements from VW. We continue to hold EMN, EMH and VUL for the long term.

S3 Consortium Pty Ltd (CAR No.433913) is a corporate authorised representative of LeMessurier Securities Pty Ltd (AFSL No. 296877). The information contained in this report is general information only. Any advice is general advice only. Neither your personal objectives, financial situation nor needs have been taken into consideration. Accordingly you should consider how appropriate the advice (if any) is to those objectives, financial situation and needs, before acting on the advice.

S3 Consortium Pty Ltd does and seeks to do business with companies featured in its reports. As a result, investors should be aware that the S3 Consortium may have a conflict of interest that could affect the objectivity of this report. Investors should consider this report as only a single factor in making any investment decision. The publishers of this report also wish to disclose that they may hold this stock in their portfolios and that any decision to purchase this stock should be done so after the purchaser has made their own inquires as to the validity of any information in this report.

Processing...
Thank you! Your subscription has been confirmed. You'll hear from us soon.