Our investment FYI Resources (ASX:FYI) is positioning itself to be a significant producer of high quality, high purity alumina in Western Australia.

In May, FYI entered into an exclusive joint venture (JV) negotiation with leading global aluminium producer, $8.8BN NYSE-listed Alcoa Corp, that would accelerate development of its high purity alumina project.

As a key component to lithium-ion batteries, the market for high purity alumina is growing strongly as auto-makers globally switch to producing electric vehicles to meet ever growing demand.

Our other battery metal investments have performed very well - Vulcan Energy (VUL) is up over 6,000% whilst Euro Manganese (EMN) is up over 800% since we initiated coverage.

We added FYI to our Wise-Owl Portfolio in May, and it has nearly doubled since. Yet our hope is that FYI continues to deliver like our other battery metal picks as its management executes on its plans.

Our belief is that there are strong, positive macroeconomic headwinds for this sector in the decade ahead, and hence we have taken a long-term position in Vulcan Energy, Euro Manganese and FYI.

And today, it "almost, sort of happened"... again.

FYI confirmed that it is extending its exclusivity agreement with Alcoa for another month - the second such extension - to 5 October 2021. 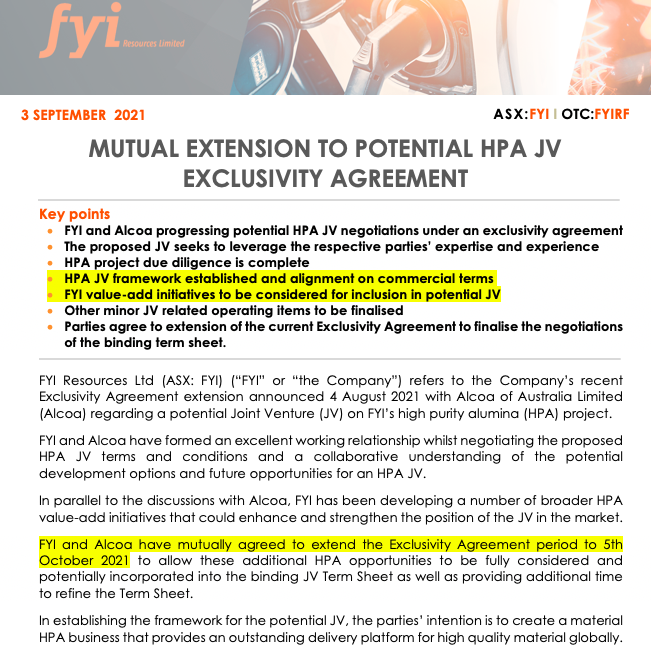 Today’s news is a positive, demonstrating both parties’ commitment to the exclusivity arrangement as they progress JV discussions further.

Importantly, there is alignment on commercial terms — the most crucial element to these negotiations — and that the extra time is required in order to incorporate "value-add initiatives that could enhance and strengthen the position of the JV in the market".

As long term investors, we support FYI management taking more time to advance negotiations, especially if the result is a superior JV arrangement incorporating multiple growth opportunities, which appears to be what both parties are working towards.

That said, we can understand that punters that would like to have seen all the details today — or even a month ago — and that impatience could drive them to trading out before October 5 arrives. But we view it to be a short-term mindset.

But in the grand scheme of things, as long term investors, what’s another month before delivery?

FYI’s project is at an advanced stage of development and has strong economics, as confirmed by its updated Definitive Feasibility Study demonstrating a project Net Present Value of over US$1BN (A$1.3BN).