Auroch Minerals (ASX:AOU) is exploring for nickel underneath a historically producing nickel mine.

We have done well out of our battery metals picks and have been observing that the world is going to need a lot more nickel in the transition to electric vehicles.

We chose to invest in AOU as it recently acquired a majority stake in a historical WA nickel mine, and it’s currently drilling to expand its nickel resource next to and below the existing nickel.

AOU just released an update on this project to let investors know that more drilling is starting in early May.

Today’s announcement shows everything is going according to plan with our favourite AOU project - which is an exploration campaign to extend the historical Nepean Nickel mine. 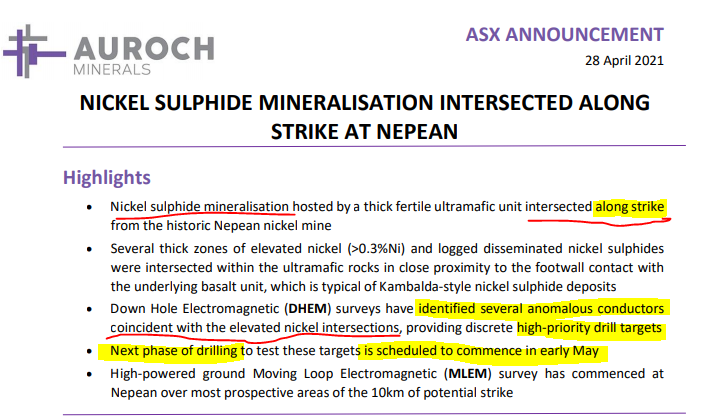 Our take on today’s AOU news:

✅ Nickel Sulphide Mineralisation identified along strike - this is good because its evidence that the nickel from the historical mine probably continues.

✅ DHEM surveys return conductors (drill targets) near the mineralisation - this is great as it provides discrete, high priority drill targets.

✅ Drilling of targets to commence in early May - this is not far away at all - so more newsflow will continue to come from AOU.

✅ Everything is going to plan - no negative surprises or delays.

What the AOU MD says:

We had a brief chat with AOU MD Aidan Platel, his comment to us was:

"Pretty significant in that we’ve identified nickel sulphides along strike from the old Nepean mine, so we now know it’s there, we just need to vector in on the massive nickel sulphide ‘feeder channel’ mineralisation."

Why we invested in AOU

Many years ago, AOU’s nickel mine used to feed a local smelter owned by mining giant BHP. It was shut down when Nickel price plunged. The Nickel price is now up - a lot.

BHP wants to ramp up nickel production in the same region as AOU’s historical mine, with a view to sell to battery makers like Tesla.

So BHP is going to need a lot more nickel from nearby...

What's Next for AOU?

AOU will build on the info gathered to vector/hone in on the potentially massive nickel sulphide "channel" mineralisation that is typical of Kambalda style nickel deposits.

AOU has down hole EM conductors coincident with these zones of elevated nickel - which means excellent, discrete drill targets...

Drilling in early May: The next round of drilling to test these targets to start in early May - ie a few weeks time.

EM Surveys happening now: A large scale ground MLEM survey over key areas of 10km of potential strike has begun. The aim is to delineate further discrete conductive bodies which will be drill tested in the next drilling campaign. This work should take approximately 20 days, and we are looking forward to seeing what kind of drill targets they can produce.

AOU to Drill for Nickel Underneath Historic Nickel Mine