Two weeks ago we announced Canyon Resources (ASX:CAY) as the latest long term investment in the Wise-Owl portfolio.

CAY is the 100% owner of one the largest undeveloped, high grade direct shipping bauxite deposits globally in Cameroon, Africa - with a JORC resource of over 1 billion tonnes.

Bauxite is the key ingredient in aluminium – considered a critical material in the primary technologies that will be the foundation of a low-carbon future including wind power, solar and energy storage (batteries).

When we launched CAY as our latest investment we mentioned that we had been watching the company for nearly 18 months to see certain milestones be met before we made our investment.

One of the key reasons we waited so long was because we wanted to see some more clarity on the permitting front. When we first started watching CAY, the company's permits were all "research permits".

After seeing CAY announce that all of the key terms of the "Mining Convention" had been agreed - which is the precursor for a mining permit application - we believed the permitting situation had been de-risked and so we launched our initial investment.

Seven days ago CAY went into a trading halt and then into suspension based on media speculation that two non-core permits owned by CAY had "not been renewed".

CAY has emerged out of halt today with clarifications on this, which are in CAY’s favour.

Today, CAY announced the granting of a 2 year extension to two permits that make up its bauxite project.

Importantly, these are research permits, which don't contain any defined bauxite resources yet - think of Cameroon ‘research permits’ as a kind of exploration licences.

But perhaps the bigger news today is that CAY also announced that:

CAY has received signatures from over 15 of the relevant ministries approving the negotiated Mining Convention agreement over the "Minim Martap" Permit.

The Minim Martap permit is the crucial permit that holds the giant 1 billion tonne JORC resource.

CAY looks forward to executing the Mining Convention with the State of Cameroon in the ‘near future’.

With a lot of permit names and different classifications of permits over in Cameroon, it can get a bit confusing trying to understand CAY’s assets.

The image below shows the split in the project areas: 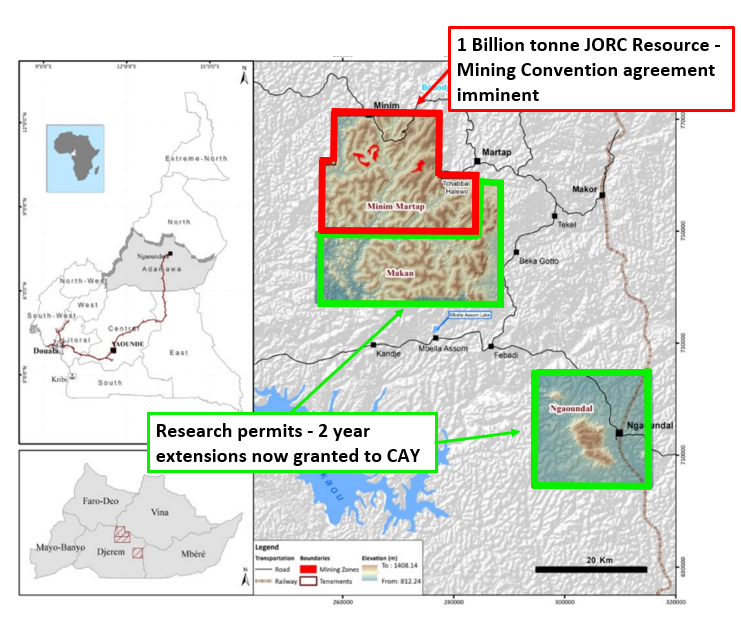 Note: the image above has been edited by Wise-Owl from its original published version.

The Mining Convention agreement is the key agreement with the State of Cameroon that sets out fiscal and legal rights on the project - the final step in the permitting process before a mining permit can be applied for.

The recent meetings held at the end of 2021 between CAY and the Cameroon Government were concluded with CAY expecting formal signing early this year. We took this as our signal to make our initial investment. 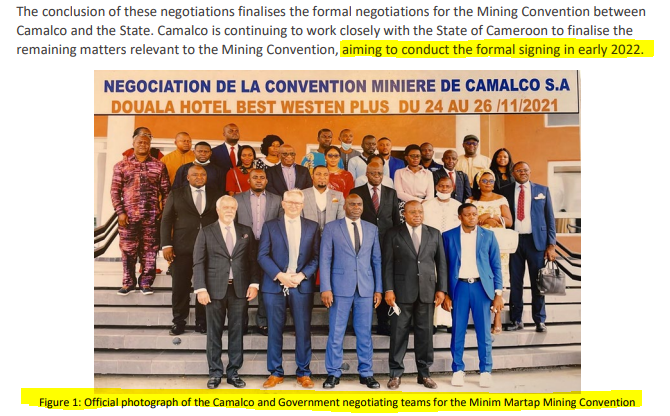 Another key milestone that was a precursor for our investment was the appointment of Nfon Ekoko Mukete to the board of CAY’s wholly owned subsidiary.

The Nfon brings to the CAY team deep in country experience and networks.

He is one of the few Traditional Chiefs in Cameroon, and is the 1st Vice President of the Cameroon Chamber of Commerce, Industry, Mines & Crafts and a board member of the Cameroon Investment and Promotion Agency.

With Nfon Ekoko Mukete in CAY’s corner we anticipated the signing of the mining convention would follow soon after.

To see a high level summary of the key reasons we made our investment in CAY, check out our 2022 investment memo here. Below is a screenshot of the "why we invested" section. 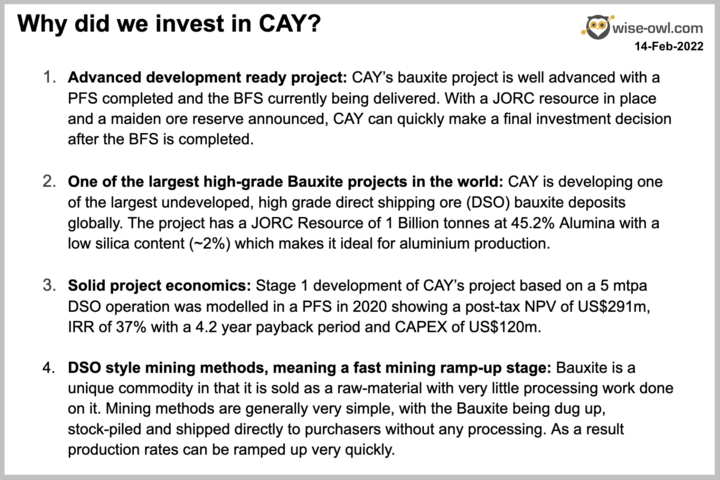 Click on the image above to read our full investment memo.

Additionaly, if you would like to read the deep-dive on the full 7 reasons why we invested in CAY you can also check out our launch note here .

For us, the key takeaway from today's news was less so to do with the research permits getting extended, and more to do with the permit that holds the 1 billion tonne JORC resource CAY is aiming to get into production.

In today’s announcement CAY confirmed that it has now received over 15 signatures from relevant ministries approving the Mining Convention agreement that CAY finalised negotiations on in late December last year. 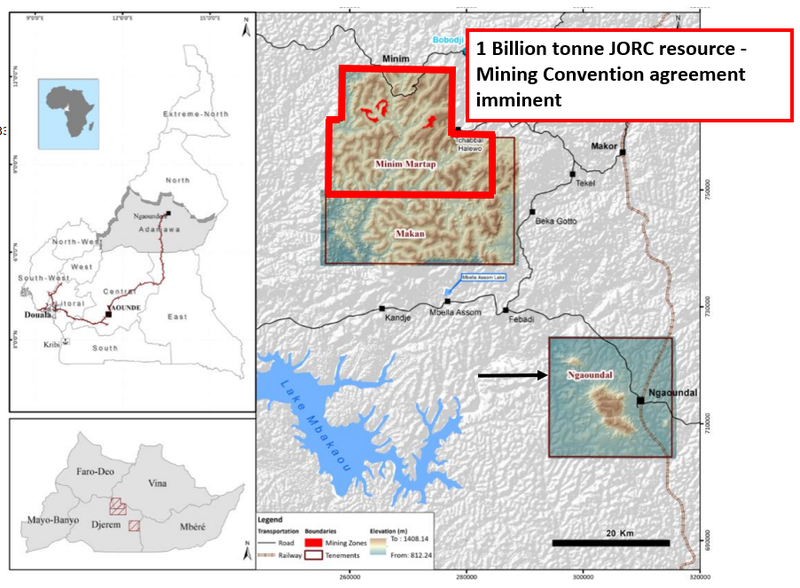 CAY applied for an "Exploitation Permit" over this project area in mid 2021 and in December began negotiating the terms for the Mining Convention agreement.

The "Exploitation Permit" is effectively the final permitting phase before a mining permit can be applied for and this gets granted at the time of the mining convention being formally signed by the Cameroon government.

In late December CAY completed all of the negotiations process with the Cameroon government and mentioned in the latest quarterly report that the signing of the formal agreement was expected early this year.

Especially because one of the terms of the extension was that CAY could seek to conduct feasibility studies so as to incorporate any additional discoveries into the "broader project".

This brings us to the other key takeaway from today's announcement - The 2 year extension given over the research permits at "Makan and Ngaoundal".

These two permits make up two out of three of the permits that CAY’s bauxite project sits on.

In the image below you can see that the project is actually split into three different licences, with these two permits sitting OUTSIDE the currently defined 1 billion tonne JORC resource.

These permits are basically the exploration upside for CAY. 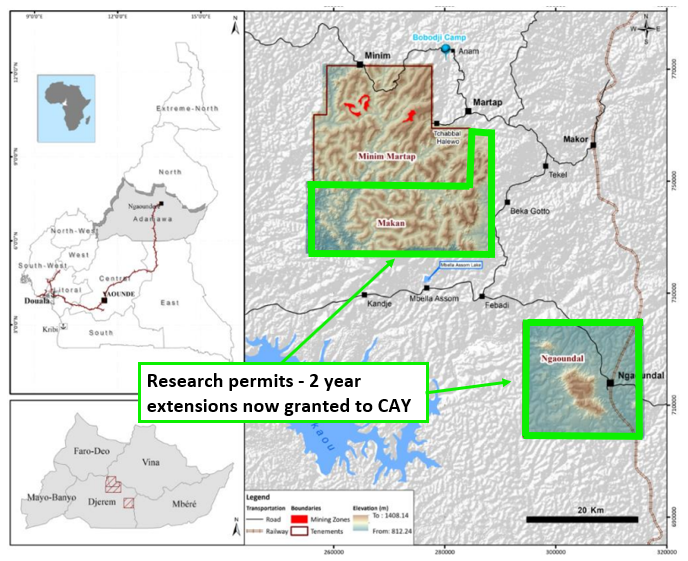 In our launch note we explained that CAY’s giant 1 billion tonne JORC resource has been established over 17 out of a total of 62 different "prospective zones" across the broader project.

The remaining 45 prospective zones all sit over the research permits that CAY has just been able to secure a two year extension on.

We should also explain what a "research permit" is.

The research permit is basically the term the Cameroon government use when granting what we know in Australia to be "exploration licences" - giving CAY the right to begin exploration over the areas in question.

This means that once the granted term ends, CAY will need to simply re-apply for the permits as they had done before getting this 2 year extension.

The key terms under the 2 year extension for the two permits are as follows:

Effectively CAY is given two years to drill and prove out a resource on these permits, which it can then incorporate into its existing JORC resource.

So why did CAY go into suspension for 7 days?

To us it just looks like a whole lot of miscommunication that was quickly resolved.

On the 18th of February we came across a news article that said that the National Mining Company (Sonamines) and the China Rail Way N°5 Engineering Group Co, Ltd (CREC 5) had agreed an MOU for the two research permits that CAY today received extensions for.

The key here is that the MOU was not binding or a granting of any permits but more so just an agreement between two parties of which CAY wasn't one of those.

It was also over the research permits and not the area where the JORC resource sits.

The MOU if it were legally binding would have granted CREC 5 research permits over these two project areas.

However, on the 21st of February the Minister for Mines, Industry and Technological Development came out and declared the MOU null and void.

In this news piece the quote below was especially telling for us.

The final part of this was especially of note to us and just as we suspected when we first read the news of the MOU, that's all it was, an MOU and nothing more.

Sonamines, despite being Cameroon’s national mining company, doesn't have the power to grant mining licences to entities and this is completely the responsibility of the Ministry for Mines.

From the 18th of February’s news on the MOU, to the cancellation on the 21st and then the swift move by the ministry to grant CAY the extensions on the 25th of February.

To us it seems as though there was just a minor miscommunication that very quickly was rectified by the Cameroon government.

We think that these type decisions would not be make so quickly if it wasn't down to some simple miscommunication.

Now all of this brings us to where we are today.

With the research permit extensions granted and over 15 signatures from different ministries received approving the Mining Convention negotiated last year.

We think that CAY’s bauxite project and the Mining Convention is hopefully right at the top of the pile of documents that is on the Minister for Mines desk.

We hope that with the attention of the Ministry on the project that the Mining Convention’s formal signing is fast tracked and we get to see the signing and further derisking of the permitting risks for the project soon.

We highlighted country risk as one of the key risks in our 2022 Investment memo. As investors we are always happy to see announcements that directly tackle the key risks to our investment thesis, but it is worth noting that no investment is riskless.

Below is a screenshot of all of the risks we listed in our Investment Memo. 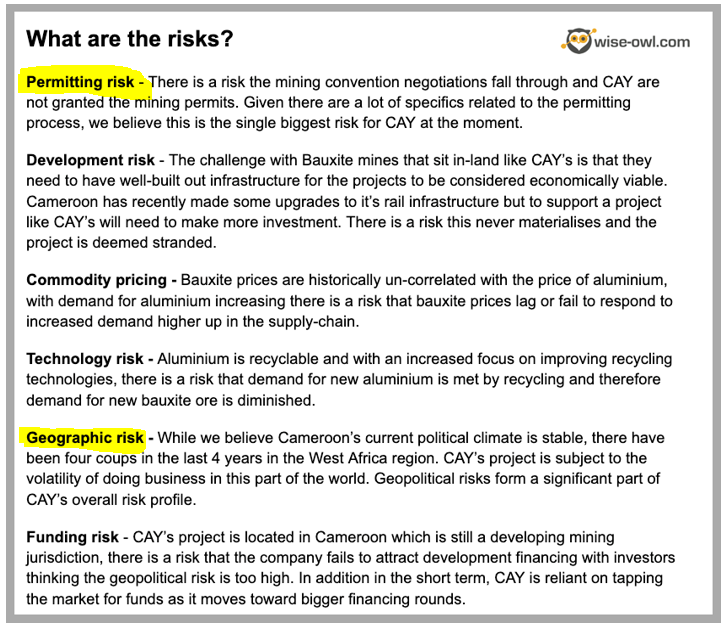 With CAY now out of suspension and the 2 year extensions to the research permits secured, we are now turning our focus to seeing CAY deliver the formal signing of the Mining Convention agreement.

With the government moving so swiftly to cancel the agreement between Sonamines and CREC, we think there is a good chance that the Mining Convention agreement with CAY is brought to the front of mind for the Cameroon Government.

We listed the Mining Convention agreement as the #1 objective in our 2022 investment memo because it provides CAY with security of tenure and allows for the company to begin discussions with offtake partners and financiers.

Below is the detailed list of the key objectives we want to see CAY achieve in 2022: 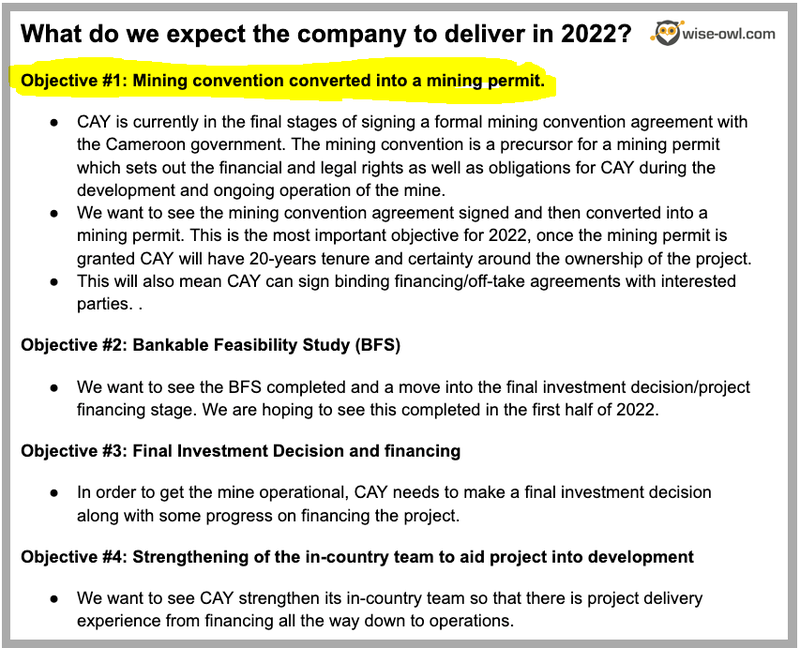 Below is our 2022 investment memo for CAY where you can find a short, high level summary of our reasons for investing.

The ultimate purpose of the memo is to record our current thinking as a benchmark to assess the company's performance against our expectations 12 months from now.