Our recent investment FYI Resources (ASX:FYI) has just been awarded "Major Project Status" from the Australian Federal Government, having been endorsed as a project of "National Significance".

But what does this mean exactly?

For starters, FYI gets direct access to the very top tiers of the Federal Government - the Minister.

FYI will go straight to the top of the queue when it comes to permitting and approvals - as it is effectively ‘pre approved’.

This endorsement from the Federal Government will open up financing options significantly as well as regulatory risk is vastly reduced.

This news comes with just 36 days to go until we get material information on FYI’s potential JV with the world’s largest alumina producer US$6.7 Billion Alcoa.

FYI will take aluminous kaolin clay from its large resource located in WA, then transport it to a HPA production facility in Kwinana, where up top 10,000 tpa of HPA is intended to be produced.

We invested in FYI as we like the battery metals thematic, and the company is in an advanced stage of development. 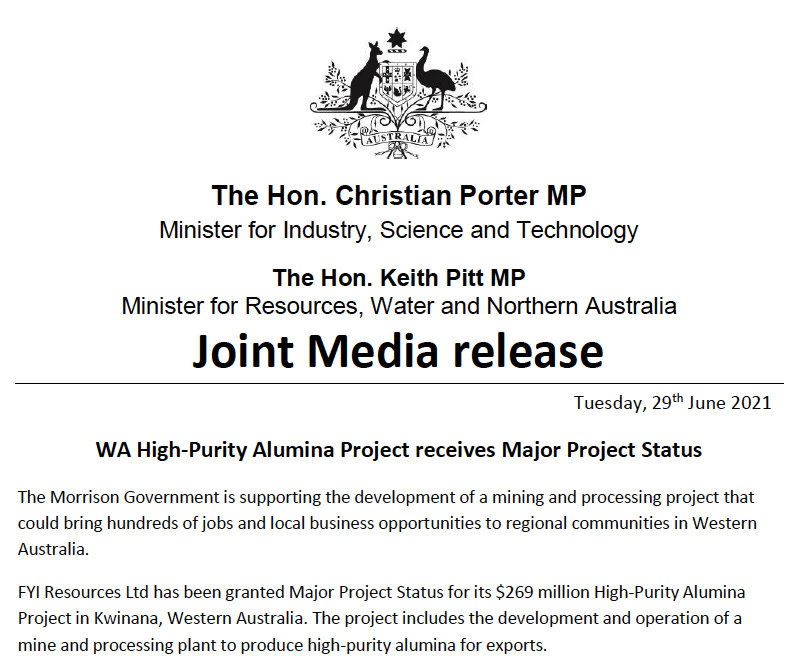 This endorsement by the Federal Government is more than just kudos for FYI’s project - here are the benefits:

This government endorsement is another tick in our investment box.

Since then the stock has been as high as 72.5c, and is now hovering around the 50c mark.

We haven't sold a share as we are long term holders and invested to see FYI execute on its strategy.

FYI has ~ 331M shares on issue, along with ~ 37 unexercised options that are currently in the money. 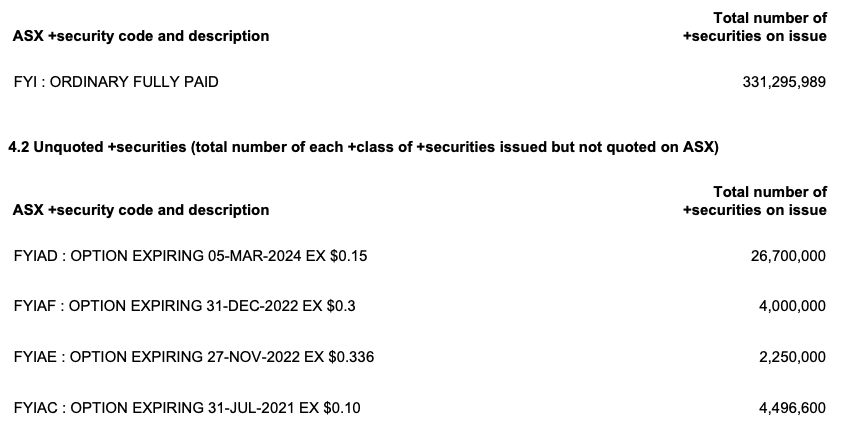 If all options are converted, this would bring in over $5.2M to FYI, however, the options have appeared to have created a natural weight to the FYI share price around current levels.

Until the majority of these options are converted, FYI may trade sideways for a while - unless a major share price catalyst occurs.

Here’s why we invested in FYI

FYI is currently capped at $170M – and a recently updated Definitive Feasibility Study demonstrated its project can deliver a Net Present Value of over A$1.3BN.

We invested in FYI for four key reasons:

We think FYI is well positioned to bring its HPA plant into a reality over the coming years, after demonstrating all the project’s credentials over recent months.

FYI is currently in exclusive negotiations with Alcoa Australia Ltd on a potential JV that would accelerate development of its project.

Alcoa Corporation (NYSE: AA) is one of the world’s largest alumina producers and a Fortune 500 company.

FYI and Alcoa started negotiations on 5 May under a 90-day exclusivity period.

We are now almost two months into this period ( just 36 days to go ) with negotiations expected to touch on the terms of a potential JV as well as the technical and commercial viability of the JV.

Given the surge in HPA demand driven by its use in lithium ion batteries, we are hoping that FYI can capitalise on this over the coming years.