A New Market for PRL’s Hydrogen

In April, PRL announced a binding MoU with renewable energy experts Total Eren and are currently undertaking a feasibility study on their HyEnergy Project. We added PRL to our Wise-Owl portfolio on 17 February 2021 when the stock was trading at 2.6 ¢ .

PRL’s HyEnergy project is located on the WA coastal town of Carnarvon, a place with lots of sun and wind, perfect for renewable energy generation.

There is a lot that both GEV and PRL will need to accomplish before any hydrogen is sold and exported, but we like this announcement because it shows that PRL is considering hydrogen export in addition to domestic hydrogen supply.

We also like that GEV is conducting this study, which means that PRL can continue to focus on key outcomes with local, state and federal stakeholders for their HyEnergy project.

Who is Global Energy Ventures?

GEV is an ASX listed company that is developing shipping solutions for transporting hydrogen to regional markets. 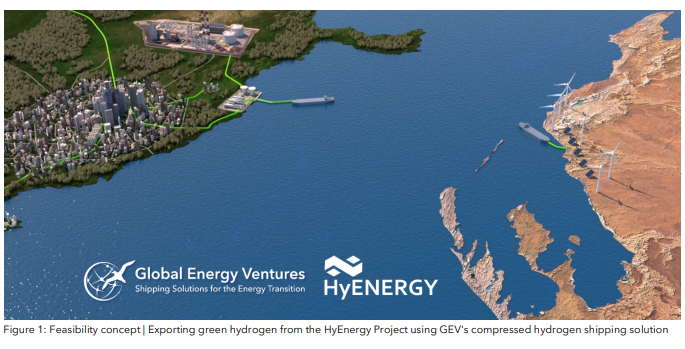 One of the biggest challenges facing the hydrogen industry is the ability to transport hydrogen over long distances.

Current solutions involve either liquifying hydrogen or converting it into ammonia for transport.

Both processes are inefficient and expensive. 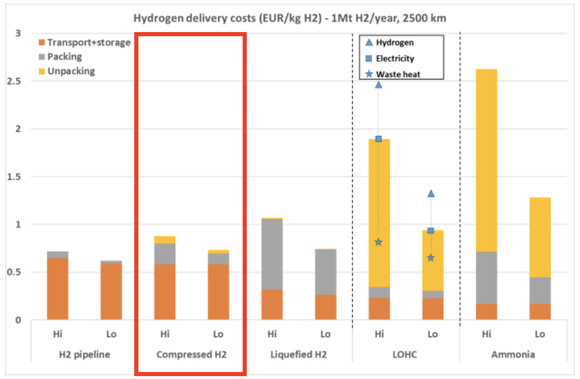 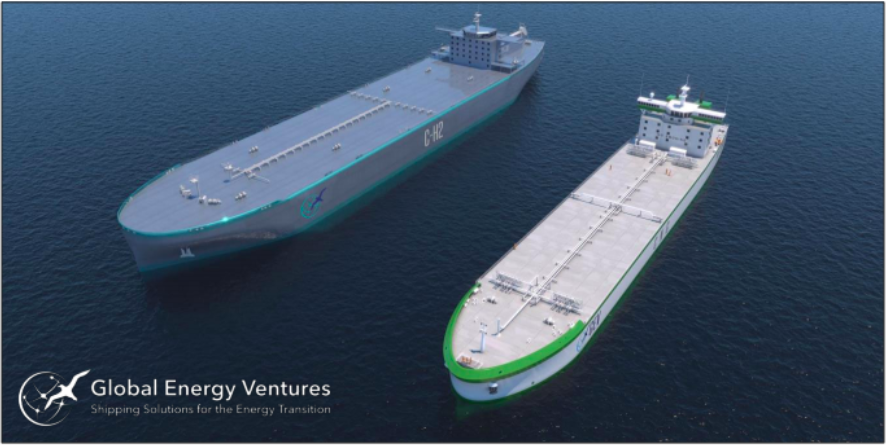 So, what does this mean for PRL?

The demand for Hydrogen as an alternative fuel source is expected to grow significantly over the next 20 years, as countries find solutions to reach net zero carbon by 2050. 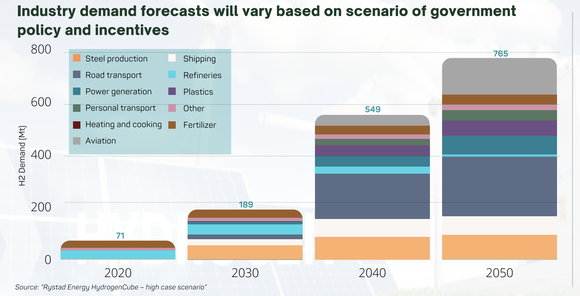 PRL’s HyEnergy project will be well placed to service this demand domestically through the Dampier Bunbury Gas Pipeline (in close proximity to the proposed HyEnergy project), but in order to service the growing demand in the Asian markets for hydrogen PRL will need low cost transport solutions.

GEV released the results of a scoping study in March that suggested their C-H2 Compressed Hydrogen Ship will be able to viably transport hydrogen up to 4,500 nautical miles.

If this remains true, then PRL will be able to access markets like China, Japan, Korea and Singapore without the need for expensive ammonia or LOHC (liquid organic hydrogen carriers) transport options. 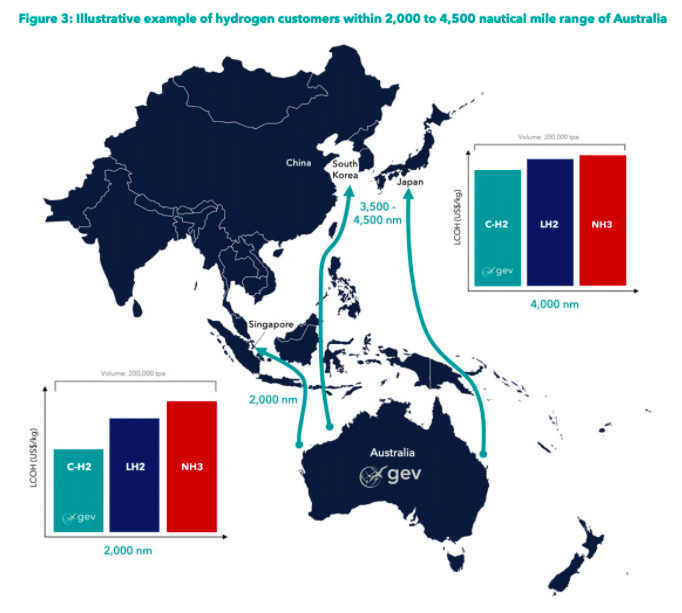 Green Hydrogen and the Asian Markets

There continues to be a heavy reliance on fossil fuels in Asia, where overall energy long term demand is projected to continue to grow. In line with the Paris Agreement, there has been a regional push to reduce greenhouse gases and to lower local environment pollution.

We are impressed with this report released in June from King & Wood Mallesons that outlines the prospects for hydrogen in the APAC region. Specifically, the report looks at three hydrogen prospects for three Asian countries, Japan, Korea and China.

Japan is a world leader in research for end-use hydrogen technologies, with approximately US$650M funding support for hydrogen related industries. However, it’s lack of onshore renewable energy options means it is tipped to be one of Asia’s biggest importers of green hydrogen.

Green Hydrogen, as a renewable clean source of energy, is one of the key industries of the future outlined in China’s 14th Five Year Plan . Although a national strategy for hydrogen production is yet to be developed in China, 16 provinces have launched their own strategies to accelerate hydrogen infrastructure and adoption ( read more here ). 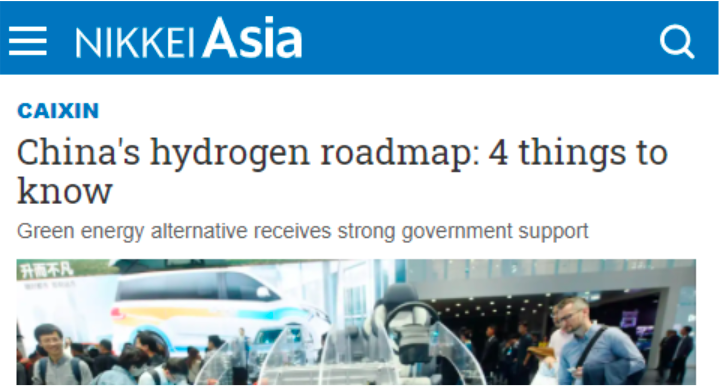 The announcement today indicates that PRL plans to service the growing hydrogen demands across the APAC region, and support the global effort to transition to net zero carbon by 2050.

Next Steps for PRL

Both PRL and its new MoU partner GEV are quite far away from hydrogen production and transport, so this MoU indicates PRL’s commitment to global hydrogen operations.

What we want to see next from GEV is the successful construction and execution of their 430-tonne capacity pilot hydrogen ship. This will take time and money, but we will be keenly observing from the sidelines to see if their hydrogen compression technology is viable.

In the meantime, what we want to see from PRL are positive stakeholder outcomes with state and federal governments, as well as progress on the scoping study and joint venture deal with Total Eren.

New to PRL? Here is what you need to know

PRL’s project is located in Carnarvon, Western Australia - a place with lots of sun and wind, perfect for renewable energy generation.

PRL is intending to use this abundant renewable energy to split water into hydrogen to supply domestic and Asian markets.

New to PRL? Here is our commentary on PRL’s journey so far:

On the 17th February, PRL announced to the market the acquisition of their Zero Carbon Hydrogen project, the first of its kind in Australia.

Less than two weeks later PRL initiated data collection for their feasibility study with the state of the art Fulcrum3D SODAR Machines collecting solar and wind data at the project.

PRL then kicked off a key milestone, after signing an MoU with Total Eren .

As the year progressed, PRL made significant headway with the Shire of Carnarvon - read the commentary here .

Then PRL strengthened its board adding an ex-chief of staff to the WA treasurer and VP of corporate affairs at Woodside who we reckon has all the key ministers on speed dial.

And today, PRL signed a MoU to investigate the prospects of using GEV’s shipping solution to export hydrogen to certain Asian markets. 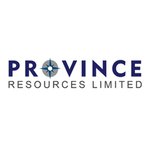