Overview: Crowd Mobile Limited ("Crowd Mobile", "the Company") is an Australian technology Company focused on mobile software and services. Its principal assets include product distribution capability via 60 mobile phone carriers in 25 countries, and proprietary content production capabilities focused on consumer advice. Founded in 2005, the Company listed on the ASX via a reverse merger with Q Limited. Crowd Mobile has entered into a Heads of Agreement to acquire Netherlands-based Track Holdings BV ("Track"). Founded in 2008, Track is focused on the distribution of mobile services via 140 carriers in 38 countries.

Catalysts: The Track acquisition represents a transformational deal for Crowd Mobile, adding to the Company a strong earnings growth history and immediate scale. Distribution capability in terms of quantity of mobile carriers and geographic presence is forecast to rise 170 percent, and 100 percent respectively. The transaction also delivers a step-change in Crowd Mobile’s financial performance. The track is on course to generate its fifth consecutive year of increased revenue and earnings. Relative to our pre-existing forecasts, pro forma FY16f revenue is scheduled to double, whilst EBITDA is scheduled to be over 4x higher.

Hurdles: Whilst the operations of Track and Crowd Mobile are relatively similar, the scale of this transaction creates integration and funding risks. There is no guarantee forecast synergies will materialise, or that Crowd Mobile can generate returns sufficient to justify and service the required expansion of its capital base. With entry barriers to the industry primarily limited to complexities surrounding the procurement of carrier relationships, Crowd Mobile may face increasing competition.

Investment View: Crowd Mobile provides profitable exposure to the market for mobile software and services. We remain attracted to its established income profile and view the Track transaction to be highly complementary and value accretive. Incorporating Track and associated funding requirements, our valuation has been upgraded by over 50 percent to $0.63/share. Representing a 200 percent premium to recent trade, we maintain our positive view and are upgrading our recommendation to ‘buy’.

Track is a Netherlands technology Company focused on mobile software and services. Its principal assets include product distribution capability via 140 carriers in 38 countries. Founded in 2008, Track is on course to generate its fifth consecutive year of increased revenue and earnings.

Figure 1: Track is projected to record its fifth consecutive year of increasing revenue and EBITDA in 2015. Note that periods are calendar years. 2014 result is derived from unaudited management accounts and 2015 represents a forecast result. Source: Crowd Mobile.

We view Crowd Mobile’s acquisition of track as immediately value accretive and strategically sound. The transaction has an enormous impact on Crowd Mobile’s distribution capabilities, expanding its quantity of telco distribution partners by 170 percent, doubling its national market presence, and increasing language compatibility by 60 percent.

Crowd Mobile’s investment appeal rests in the current and future revenue streams generated by its mobile services portfolio. We have updated our forecasts to incorporate the Track acquisition. Relative to our pre-existing forecasts, pro forma FY16f revenue is 2x higher, whilst EBITDA is scheduled to be over 4x higher.

Consistent with our initial February 3 rd report, we have considered the Company’s potential worth using a Comparables approach and Capitalisation of Future Maintainable Earnings ("CFME") methodologies.

Our appraisal assumes the Track acquisition is funded utilising a combination of corporate debt and convertible notes, resulting in a fully diluted share base of 150.7million. The funding mechanisms are assumed to be non-amortising and the average cost of funds is assumed to be 11.25 percent, resulting in interest coverage rising from 4.1x in FY16 to 5.7x by FY18. The convertible notes are assumed to exchange into ordinary shares at $0.40/share.

To consider the impact on differences in the funding mix, we have run multiple scenarios as part of a sensitivity analysis. Our valuation is most sensitive to the amount of ordinary equity funding. Every 10 per cent increase in equity funding reduces our valuation by 6 per cent. 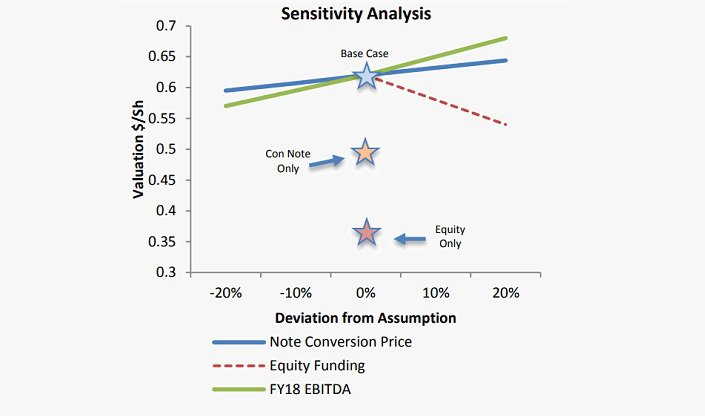 Figure 2: Impact of different funding and earning scenario’s on our valuation. Note that the valuation is most sensitive to the proportion of ordinary equity issued to fund the acquisition. We estimate an all equity-funded deal @ $0.20/share results in a valuation of $0.36/share. Should the transaction be funded entirely by convertible note exchanging at $0.40/share, we estimate the valuation would be $0.50/share. Our base case scenario is for a 50/50 corporate debt and convertible note package (excluding vendor shares), resulting in a valuation of $0.63share.

THE BULLS AND THE BEARS